The Warkworth baker who denied a request from a lesbian couple for a cake has been labelled “rude”, “intolerant” and in breach of human rights, by a lawyer.

Law firm Henderson Reeves director Thomas Biss said refusal to provide a cake for the couple’s wedding was a bad business move, and was “rude, insensitive, not good business, intolerant and unpleasant”.

“It is unlawful to refuse to supply goods or services on the basis of one of the prohibited grounds of discrimination, that includes sexual orientation,” Biss said.

“No doubt there are better cakes available elsewhere.”

The couple, Moe Barr and Sasha Patrick, both live in Brisbane, but since Australia had not yet legalised same-sex marriage when they got engaged last year, they planned their wedding at Waipu in Northland, for next January. 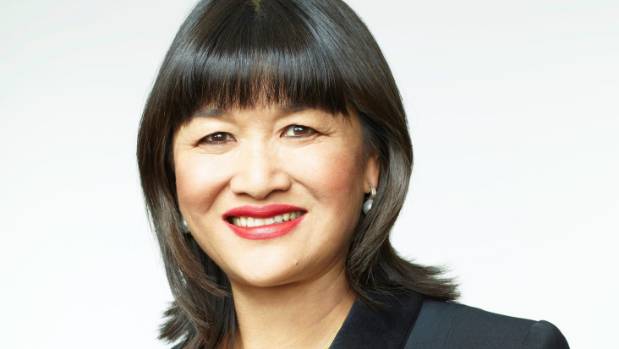 When they approached Kath’s Devine Cakes in Warkworth to make the cake, “Kath” refused, saying despite the New Zealand government legalising same-sex marriage, she believed it was not correct and therefore she would not make the wedding cake.

“I do not wish to offend either of you and I thank you for letting me know that it is a same-sex wedding,” the email said.

“Even though as individuals you are both fabulous and amazing people, I must follow the integrity of my heart and beliefs. Our government has legalised same sex marriages, but it is not my belief that it is correct, therefore I will not support it and cannot make your wedding cake for you.”

The company has received a spike in ratings and reviews on Google Reviews over the past 24 hours expressing a range of views. 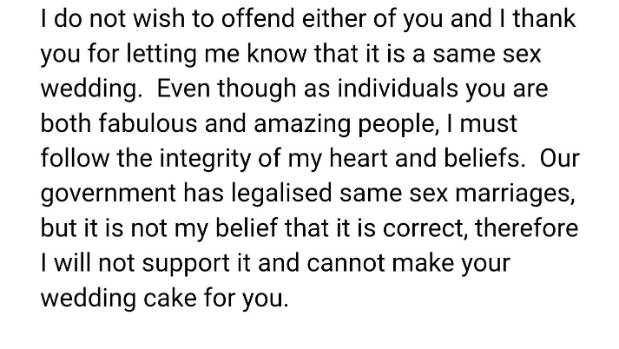 Moe Barr received an email refusing her cake consultation request because it was against the baker’s beliefs.

Partner at law firm Chen Palmer Mai Chen said the case was similar to one in the United States, which went to the Supreme Court.

In June, the US Supreme Court sided with a Colorado baker who refused to make a cake for a same-sex wedding back in 2012, although justices avoided a wider ruling on religious exemptions for businesses.

The case left open the broader question of whether or not the baker’s right to freedom of expression over ruled the couples right to not be discriminated against, Chen said.

However in New Zealand the Human Rights Act includes sexual orientation as a prohibited ground of discrimination.

“Section 44 expressly states that it will be unlawful to ‘refuse or fail on demand to provide any other person’ with goods, facilities, or services by reason of any of the prohibited grounds of discrimination,” Chen said.

“There is no express exception in relation to religious or ethical belief.”

So, denying a good or a service to a same-sex couple on the grounds of religious belief was illegal under the Human Rights Act, Chen said.