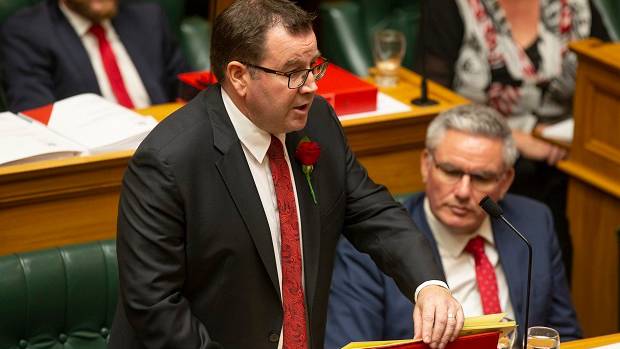 In the 2018 Mood of the Boardroom survey, CEOs were asked: Does the Coalition Government have a co-ordinated plan of action focused on raising New Zealand’s economic performance?

Beca chief executive Greg Lowe says the plan to grow the economy is not evident, despite the rhetoric — “Economic growth is key to funding the Government’s social agenda and the plan needs to be developed along with the business community.”

A marketing executive says it is too early to judge: “There are a number of reviews in the areas of tax, employment law, labour productivity, R&D and technology that need to come back to confirm the economic framework and how actions are to be coordinated, so that we can judge if this is a plan that will work.”

On October 25, 2017 Robertson became Minister of Finance at the formation of the Coalition Government, having held the shadow finance portfolio for three years under Labour leaders Andrew Little and Jacinda Ardern.

In his first budget, delivered on May 18, the Government’s finances showed a forecast surplus for 2018-19 of $3.7 billion, up from the half-yearly forecast of $3.1b, rising to more than $7b by 2021. Treasury forecast economic growth up marginally, averaging 3 per cent a year over five years.

Robertson said the reports showed how well the Coalition Government managed costs and that it had stuck closely to the requirements in the Budget Responsibility Rules.
These figures undoubtedly contributed towards fiscal discipline topping the Government’s top performance metrics, as rated by CEOs in this year’s survey.

Robertson delivered a significant boost to public services, including $3.2b extra for health services over four years, a large-scale state house building programme, and an extra $1.6b for education.

He said public services had been underfunded for too long.

“Budget 2018 begins the economic and social transformation that must happen if New Zealanders are to have better lives in decades to come.”

But some survey respondents are nervous the social transformation the Coalition Government is undertaking could be to the economy’s detriment.

“Currently the Government is more focused on income distribution and increased support for those in need, than the economic performance needed to fund this,” says a chief executive from the media industry.

An executive from the agricultural industry says: “I don’t think they understand the real levers of economic performance — and that a strong economy will ultimately provide.”

What more should be on Robertson’s agenda?

Of the 154 survey respondents, 110 responded to the open-ended question “What more should be on Finance Minister Grant Robertson’s economic agenda?”

Of those sharing their advice, there were five key recurring themes:

On the Future of Work, Westpac’s David McLean says: “In our industry the future of work’s going to be a big issue… The Government has done quite a lot of work on the future of work but I think you’re right, we need to now get together and actually turn that into practice.

“How it gets turned into practice too could go one of a number of ways but it is a real issue.”

Some who indicated Robertson should be prudent with economic management are concerned at wasteful spending:

“Stop government wastage. Policy has been OK but the execution has been awful,” says Paul Glass of Devon Funds Management.

Says Spark’s Simon Moutter: “Ensure that the quality of government spending is maximised for the greatest economic/social return — recognising that this means you can’t satisfy everyone.”

Eight respondents were hesitant to add anything further to Robertson’s agenda — suggesting he has enough on his plate.

“Nothing!” said Simplicity’s Sam Stubbs. “There is plenty there, provided he lives up to the promises and areas of focus.”

“I think Robertson is one of the standout performers in this government. He is doing everything he should be doing — he is not creating the issues,” responded Mai Chen of Chen Palmer.

“He’s doing tremendously well in the toughest job in the Government,” says a CEO from the energy industry. “Huge work rate, big intellectual engine, personable. The Government needs another five of him.”

Only a handful of CEOs advised Robertson to pay more attention to social responsibility targets — including one from the fashion industry:

“Grant has to put on his big boy pants and work on our future. Focus on getting everyone housed and fed, and a good education.

“Pay teachers a LOT more — and throw everything at P to get it out of New Zealand.”

The rules put fiscal constraints on the Government, including a commitment to get net core Crown debt to 20 per cent of GDP by 2020 and keeping core Crown spending at roughly 30 per cent of GDP — figures that have been deemed “arbitrary” by economists.

“We have made this commitment to ensure that future generations of New Zealanders are in a position to be able to respond effectively to any shocks — natural or economic,” Robertson told a Westpac business breakfast earlier this year.

“We have been criticised by people who argue that these rules are too tight, and on the other hand by those who, despite all evidence to the contrary, believe Labour-led governments cannot carefully manage the Government’s books.”

Many of those in agreement with the rules feel that Robertson’s insurance against shocks is justified: “In the next year or two we will experience a cyclical downturn, therefore it is important we keep our powder dry and have headroom to increase debt to soften the downturn when it comes — because it will,” says a blue-chip company chair.

A marketing executive explains we should take the opportunity to reduce debt: “Take it now as the world economy is by no means certain, particularly with protectionism policies coming out of USA.”

Others say the restraints are helping to build credibility in the Government.

“It is one of the key factors giving Labour the perception of understanding the business sector,” says an executive in government relations.

ICBC NZ chairman Don Brash says the Government has a credibility problem already on the spending side: “Moving away from any kind of meaningful constraint on spending would be a serious further blow to their credibility.”

New Zealand’s need for massive spend in key areas — particularly infrastructure — was the main reason given to justify scrapping the rules.

“If the spend was on building infrastructure then definitely yes — Robertson should lift the cap. The debt should be amortised over the life of the asset,” says the chairperson of a professional services firm.

An executive in the food and beverage industry says: “We need investment in New Zealand now. Whilst I would not like to see uncontrolled spending, transport infrastructure, education and health need to be transformed, with speed.”

Survey respondents were decisive: 79 per cent feel that entities like the the NZ Super Fund, ACC, iwi and KiwiSaver Funds should be encouraged to invest directly in new infrastructure; 14 per cent said no, 7 per cent were unsure.

“Especially considering that we have restrictions on overseas investment in strategic assets — these entities should be directed to invest a minimum amount in new infrastructure,” added another.

Though many included the caveat that the investment case would need to stack up.

Chair of the MinterEllisonRuddWatts partnership, Lloyd Kavanagh, says “Provided ‘encouraged’ is not a euphemism for compelled. They will invest if the project meets their hurdle rate of return for the risk involved. Remember that KiwiSaver Funds are the members’ own savings from their after-tax income, which they will rely on in retirement.”

In light of recent revelations that the Government has borrowed $6.5 billion through Crown entities NZTA and Housing NZ — which did not show up on core government net debt metrics — CEOs were asked: Do you approve of Housing New Zealand and NZTA leveraging their own balance sheets to acquire funds for new infrastructure investment?

Those in agreement suggested this would put the accountability closer to the decision-makers — “but it would need transparency and a consolidated total Crown / state owned enterprise view,” said an agribusiness boss.

EMA’s Kim Campbell asked: “What is the point of them having a balance sheet if they don’t use it?”

But others were wary this would obfuscate the issue.

“These are not trading entities,” says Beca’s Greg Lowe. “Government debt should be held by the Government.”

Craig Stobo, chair of the New Zealand Local Government Funding Agency adds: “While it can be argued that funding in their own names enables those agencies to operate more independently of ongoing Ministerial approvals, the taxpayer is not informed of the extra funding costs of that debt relative to borrowing more cheaply via the New Zealand Debt Management Office.”

Leo Donnelly - Special Counsel, Chen Palmer been added on Asia Media Centre as one of the expert