Japan’s ruling party, the Liberal Democratic Party (LDP), will be electing its next president at its leadership election on 20 September.

Incumbent president and current Prime Minister Shinzō Abe is running for re-election after a party rule change in 2017 allowed him to seek a third term. Also vying for leadership is former defence minister Shigeru Ishiba.

Abe is highly likely to return to office, and he is expected to push for change to Japan’s pacifist constitution.

What significance does the LDP election have for Japan, and what are the implications for New Zealand? The Asia Media Centre spoke to Japanese-New Zealanders and academic experts for their comments. 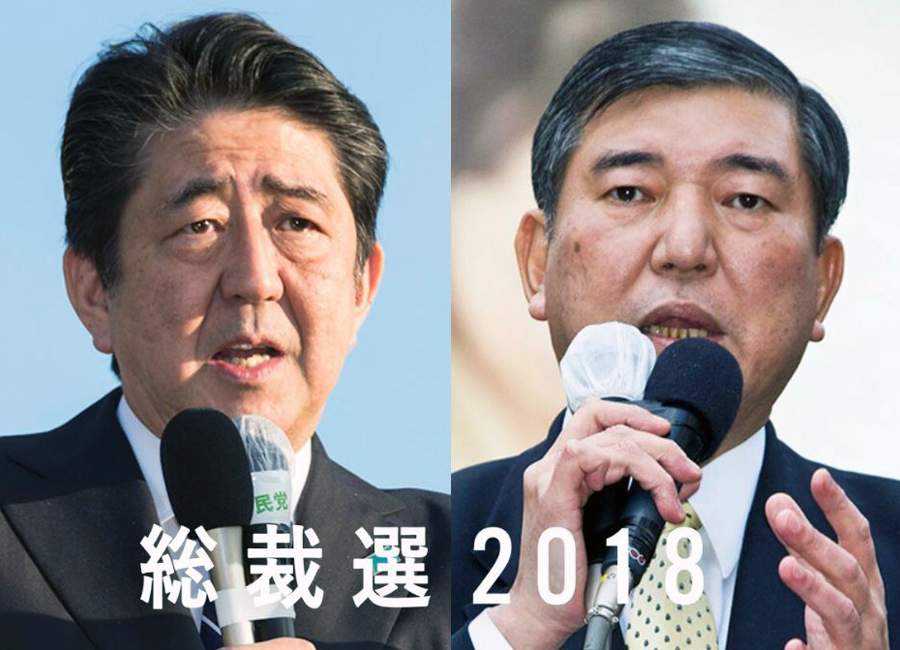 A mandate to change the constitution

“One significance of the election is that it is a test for Prime Minister Shinzō Abe’s political leadership in various aspects. Since his return to the office in 2012, Abe has undertaken Abenomics (deflation and GDP growth for example), security legislation reform and many more. The election will highlight whether Japan is calling for Abe’s continued leadership in further development in economy and politics, or a new and fresh start by Ishiba.

“Both Shigeru Ishiba and Abe are keen on revising the constitution. Whoever does it, the country’s constitutional revision will be a historical event for post-WWII Japan. Over seven decades, no prime ministers have managed to revise it. As domestic society and the international environment change over time, there may be a need for the constitutional change.

Succession plan to start after election

“Japan’s next prime minister will be decided, so the LDP elections are quite significant, but Shinzō Abe is bound to get re-elected so rather than the elections per se, the way he is going to win is important. A sweeping victory would mean a broad mandate for Abe to pursue his most important policy initiative – the revision of the constitution.

“At the same time, Abe’s re-election will also mean that his term will end in September 2021, and the various deals and negotiations among powerful LDP members that will decide the post-Abe party leadership will start immediately after the elections.”

“The 2017 land purchase scandal surrounding by Shinzō Abe, his wife and his close friends had an impact on his popularity. The Nikkei Shimbun’s public opinion poll result showed that 39 percent of the respondents expressed their support whereas 52 percent didn’t. However, his popularity returned over a year with 48 percent in favour and 42 percent against.

“Another poll by the Nikkei last month suggested 39 percent of the respondents answered Abe was the best suitable leader from the LDP, with 31 percent supporting Shigeru Ishiba, the only contender. Ishiba seems to be lacking a good wind to pick up his pace against Abe. The majority of the MPs from the LDP (up to 80 percent) is known to support Abe.”

Business as usual, whatever the result

“[Abe’s time in power] has been long, but this will be the last term. The LDP has mostly dominated in post-war Japanese politics, and due to the powerful bureaucracy a change of PM does not mean major policy changes. Abe will push to revise the constitution as it is his last term. He would like to be remembered for making history – the constitution revision has been his goal for many years.

“Ishiba, on the other hand, will not hurry the process of revision. He seems to be more focusing on domestic issues like ‘cleaner’ politics, revitalising regions and dealing with ageing society, without much concrete vision. Hard to say what would happen if Ishiba were to become PM.”

Abe as a third-term PM

“Abenomics has enabled Shinzō Abe to hold his position for as long as he has. Economy has been the main concern of recessionary Japan, and his Abenomics has seen positive economic indicators. GDP and stock prices have risen, the unemployment rate has gone down, even though it is questionable to what extent people’s living standards have actually improved with Abenomics.

“The changing security environment in Northeast Asia (such as the North Korean issue and China’s rise) has also contributed to Abe’s popularity. Abe is known for assertive foreign policy, and this has appealed to those who are concerned with changing security environment of Northeast Asia. While Japanese people are not keen with constitutional revision, there is an increasing concern around security and diplomacy.”

Comparisons with Putin and Erdogan unavoidable

“Parallels between [the LDP Party rule change allowing Shinzō Abe to run for a third term] with other world leaders such as Russia’s Putin or Turkey’s Erdogan who have introduced various legal changes that enabled them to stay in power, are unavoidable. At the same time, the change was in the Party rules not in the general legal structure; Japan remains a democracy, and so far Abe has not done anything that will undermine the electoral system and make it less democratic.

“Nine years in power can be seen as long, but it depends. John Key served as New Zealand’sPrime Minister for eight years, many US presidents serve for two terms, in South Korea the presidential term is only five years and often is seen as too short … Moreover, until recently, Japan has often been criticised for having a very weak political leadership, with PMs changing almost every year.

“It also remains to be seen whether any of Abe’s successors will be able to repeat his success.”

No real competition within LDP

“To a great extent, Shinzō Abe has managed to pull up the Japanese economy in the last five years by implementing monetary policies assertively and boosting exports. Although his Abenomics is far from perfect, surely MPs from the LDP, the voters and the general public have been asking, ‘Who would be his alternative?’.

“A lack of strong contenders that could challenge Abe within the LDP has enabled Abe to stay in power for a reasonable time, let alone leaders from the opposition parties.”

Impact of election on international ties

“Internationally, Shinzō Abe has established relatively good personal relations with US President Donald Trump and Russian President Vladimir Putin, so his re-election will probably be welcomed in these countries. Contrastingly, his relations with China’s Xi Jinping and South Korea’s Moon Jae-in are far from good, so the historical memory and territorial disputes-related tensions will probably continue.

“Unlike Abe, Shigeru Ishiba is not seen as being affiliated with the hawkish right-wing in Japan. If he were elected, he would probably be welcomed in China and South Korea,  and it could lead to improved relations.”

“Under his Abenomics in the last five years, Shinzō Abe signed the CPTPP, along with the Economic Partnership Agreement with the European Union. Abe is expected to continue to push these free-trade agreements forward. In fact, Abe recently reaffirmed his pro-free trade policy contrasting himself from Trump’s US trade sanctions. Generally, New Zealand and Japan led by Abe (if he were to be elected) will be on the same page as far as the CPTPP is concerned.

“Regarding security cooperation in the Indo-Pacific region, Abe has been active in sending Japanese Maritime Self-Defence ships to the Proliferation Security Initiatives, a multilateral security exercise for countering the proliferation of weapons of mass destruction in the Asia-Pacific region both nations participate. Ishiba also served as Ministry of Defence in 2007. He has also been supportive in maintaining maritime security through collective efforts among countries in the region. Whoever wins, Japan, along with New Zealand, will be committed to contributing to maritime security and maritime surveillance activities.”

Issues that may affect election outcome

“My first thought was the recovery missions from a series of natural disasters, flooding, typhoons, and earthquakes. They are helping Shinzō Abe to boost his support, in contrast to Shigeru Ishiba who cannot really showcase his leadership. I think it is Ishiba’s situational disadvantage rather than Abe doing a fantastic job. The Abe-Putin summit could be a key issue, but it is highly unlikely both are happy to resolve the long-lasting territorial disputes of the northern territories or do it overnight. And I don’t think Abe would plays this political gamble before the election.”

Is the LDP election of interest to you?

“I am interested but I don’t expect much will change in Japan. I don’t think the LDP elections will affect anything. I don’t think Shigeru Ishiba will have a chance to win. Shinzō Abe will continue to be dominating the political scene.”

“Yes, because the leader of the LDP will usually become the Prime Minister of Japan. Since 2012, this has been Shinzō Abe. Up until recently, the general expectation has been that Abe’s hold on the LDP leadership and role as Prime Minister is secure. But news commentary suggests the impact of recent political events, such as the Moritomo Gakuen scandal, may have made his position less secure.

“Public opinion is a general barometer, but the public don’t vote for the LDP leader. However, the various LDP party factions would be influenced to some degree by their perception of how the public view Abe and his opponents – both the ones who may stand against him in the elections and the ones who may choose to wait in the shadows.”

What’s the significance of the LDP elections for Japan?

“Whoever comes out on top, if the new LDP leader is not perceived to be secure then public and business confidence in the Japanese government may be affected and that may impact on their engagement with countries like New Zealand.

Will the result have significance in New Zealand?

“No change will be easier for the New Zealand Government and it is ‘business as usual’. The LDP is the largest political party – even if Shigeru Ishiba took over as Prime Minister, it’s the same political party and so the status quo remains the same, especially for the CPTPP.”

“The Japanese-New Zealand community has an obvious personal interest. But the wider New Zealand community – business and otherwise – also has an interest in the outcome of the LDP election. The recent public debate about the merits of New Zealand’s involvement in the CPTPP have raised public awareness of the political brokering that sits behind trade agreements.

“Whatever side of the debate one supports, I think most New Zealanders get that it’s not just about trade. New Zealand is a small player as opposed to dominant players like China, the USA and Japan, but it has a real interest in how these countries approach trade and economic growth, and what opportunities and risks this provides for New Zealand. If there is a change of PM in Japan, or fragmented support, this may affect New Zealand’s best interests.

“New Zealand is part of the Asia-Pacific region not just geographically but also economically and politically. New Zealand society is becoming more and more diverse. Census projections suggest that by 2030, 51 percent of New Zealanders will identify themselves as of Asian or Māori or Pasifika ethnicity. What happens in Asia matters because it can impact on us whether we want it to or not.”

Despite being a pioneer, New Zealand falls short on women’s rights