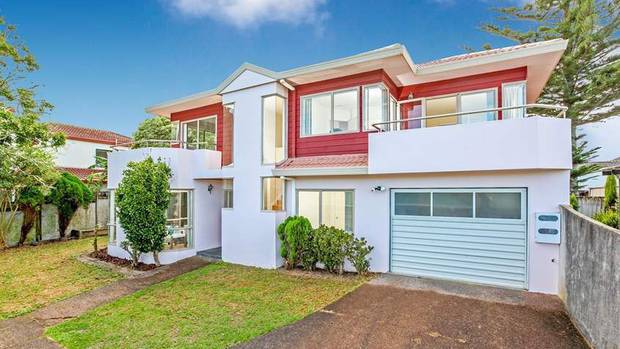 A flatmates wanted listing for this Hillsborough rental said it preferred Chinese or Indian applicants. Experts say the law allows such preference. Photo / Trade Me

Trade Me says it won’t take action over a “flatmates wanted” listing which states a preference for Indian or Chinese people because it does not break the law or breach its standards.

The listing for a six-bedroom flat in Hillsborough says the tenants are seeking “mature, friendly flatmates” and that they would “prefer Chinese or Indian” people.

Gina Easterbrook, from Auckland, said she came across the advertisement when she was searching for a flat for her son Max.

Max is a New Zealander of European and Maori descent, and she felt the ad was discriminatory.

Trade Me head of trust and safety George Hiotakis said the Human Rights Act allowed renters to be specific about who they lived with.

But the website did not want flatmate ads to be discriminatory or insensitive, and it removed any listings which excluded ethnic minorities, religious groups, LGBTQI or disabled people.

“In this case the ad does not aim to exclude any of these groups and actually indicates a preference only,” Hiotakis said.

“While we get some people might not like preferences such as this being expressed, it’s actually better for both the lister and the prospective tenant as it puts everyone on the same page and prevents anyone’s time being wasted.”

Trade Me had received one complaint in relation to the Hillsborough listing and did not plan to take any action. 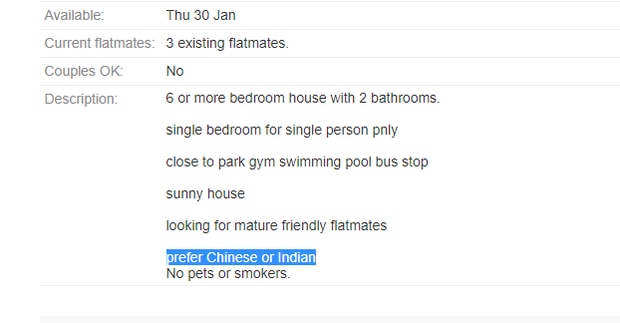 The listing for the Hillsborough flat. Photo / Trade Me

Easterbrook said she was confused by the rules around discrimination.

“The way I see it is that the laws of discrimination in place are for … minorities and that is not fair,” she said. “Are we not all equals?”

Lawyer Mai Chen, who is chair of the Superdiversity Institute, agreed with Trade Me’s position that the listing did not break the law.

“There is an exception, however, which says that nothing shall apply to residential accommodation which is to be shared with a person.

“So if you are a flatmate and you are saying these are the sorts of people who I want to be with, then it does allow somebody to discriminate due to that exception.”

The exception did not apply to a homeowner or landowner who would not be sharing the property, Chen said.

“If it’s my house and I’m renting it out and I say ‘I don’t want any Asians here’ then obviously I am caught by the prohibition because I am not living there.

“You can see the law is trying to draw a balance. On the one hand, it is keeping people from being discriminated against on the basis of irrelevant considerations.

“On the other hand, it is saying that within the confines of your own home you should be able to speak to preference.”

Chen noted that it was discriminatory to incite hatred against people.

“But I don’t think those words are tantamount to inciting hatred, just that they prefer Indian or Chinese.”

The Trade Me user who posted the listing did not immediately respond to a request for comment.

In its advice for listings, Trade Me encourages users to use positive and inclusive statements, which say what they are seeking in a flatmate rather than what they do not want.

There are further exceptions in the law for hostels, clubs, schools and retirement villages, which can limit their accommodation to people of the same sex, marital status or religious or ethnic belief.

The Human Rights Commission advised renters or landlords to be explicit about what qualities they wanted in a flatmate. Vague language like “professional couple” risked being discriminatory on the grounds of employment and marital status, it said on its website.

What does Waitangi Day mean to you? He aha te tikanga o te Rangi o Waitangi ki a koe?